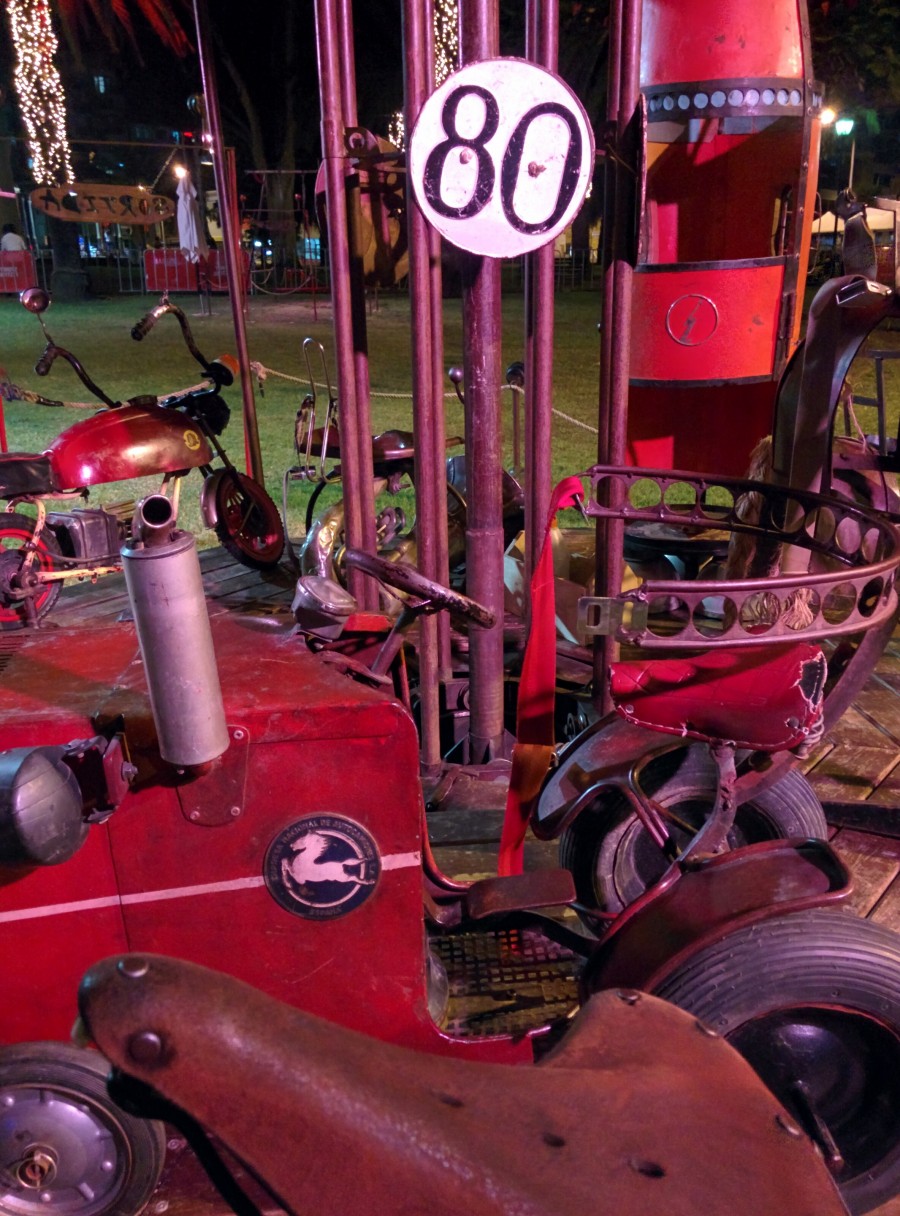 I have been very fortunate over the last three weeks to have been made part of a very special carnie family – a concoction of physical theatre performers, backpackers, jugglers, clowns, directors, spruikers, invigilators and other such dodgy types. Together we are the Sydney cast of Antigua i Barbuda as part of Sydney Festival.

The company hail from Barcelona and eight excellent Catalans join us for frolicking fun at the park next to the Riverside Theatre in Parramatta. Antigua i Barbuda takes its name from the Caribbean islands, but the name also refers to ‘the bearded lady’ and ‘antique’ in its original meaning. Our fairground installation is made up of seven fabulous contraptions, all using some form of old style mechanics or human locomotion. It is called Arquitectura de Feria, meaning ‘Fair of Architecture’.

Le Tour Insolit – Aka ‘the unusual journey’. This exciting race is held on stationary bicycles that power very, very tiny ones in a competition across a spectacular miniature landscape. The audience cheers as the announcer commentates the race and blows the victory horn. Somehow the children always seem to win, I wonder why? 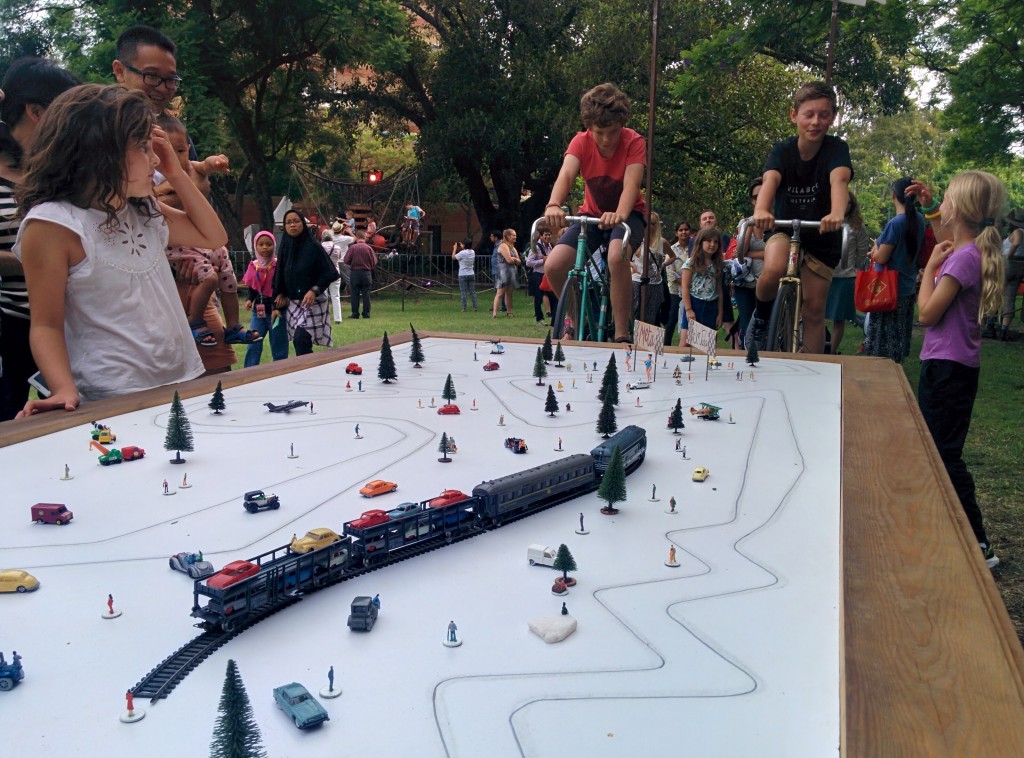 Oliva i Barbuda – Again we encounter the bearded lady, but she has taken an interest in olives. Children must eat an olive so that they can use pit as ammunition in an air gun that shoots moving bicycle bells. If you hit the piano strings instead you lose.

L’Abbre De Ferro – The Iron Tree, or as I like to say, “the Ironing Tree – visit if you have a crinkly shirt”. Nestled in the shade of a beautiful tree, this is a merry go round with steam punk flying machines as vessels. It is operated by the parents by pushing a big double handed lever. 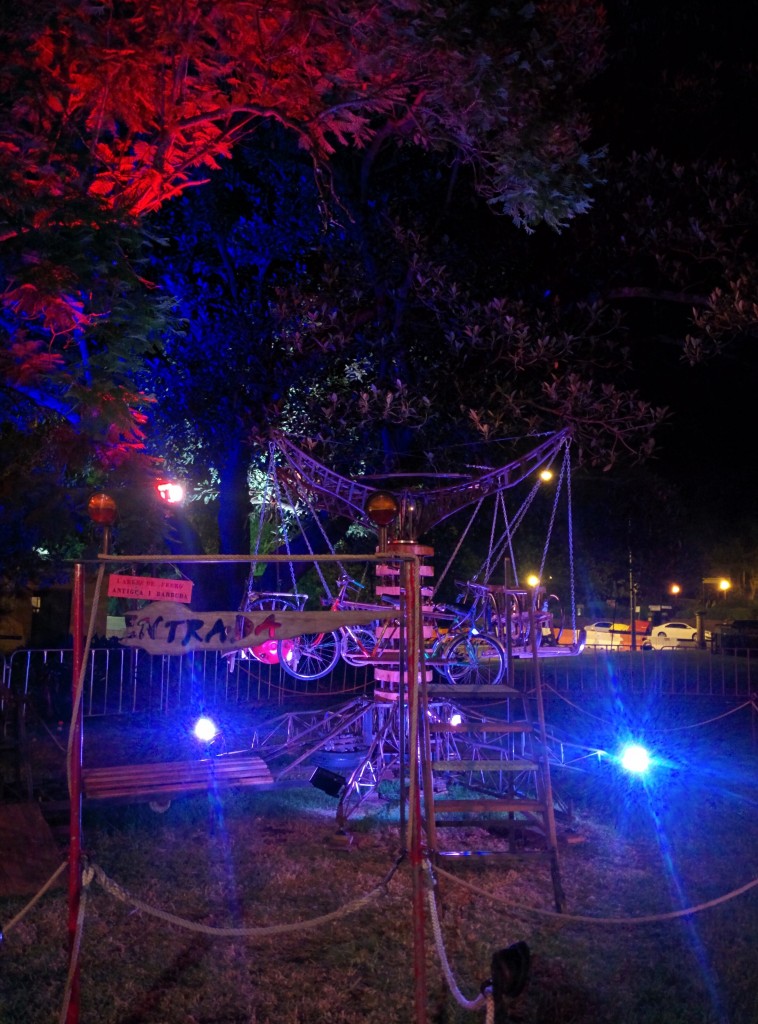 Mini Cavayette – This is a carousel beautifully crafted with carved wooden horses, a crocodile which can open and close its mouth, a rocket ship and aeroplane. The machine is powered by pedaling on a bicycle. 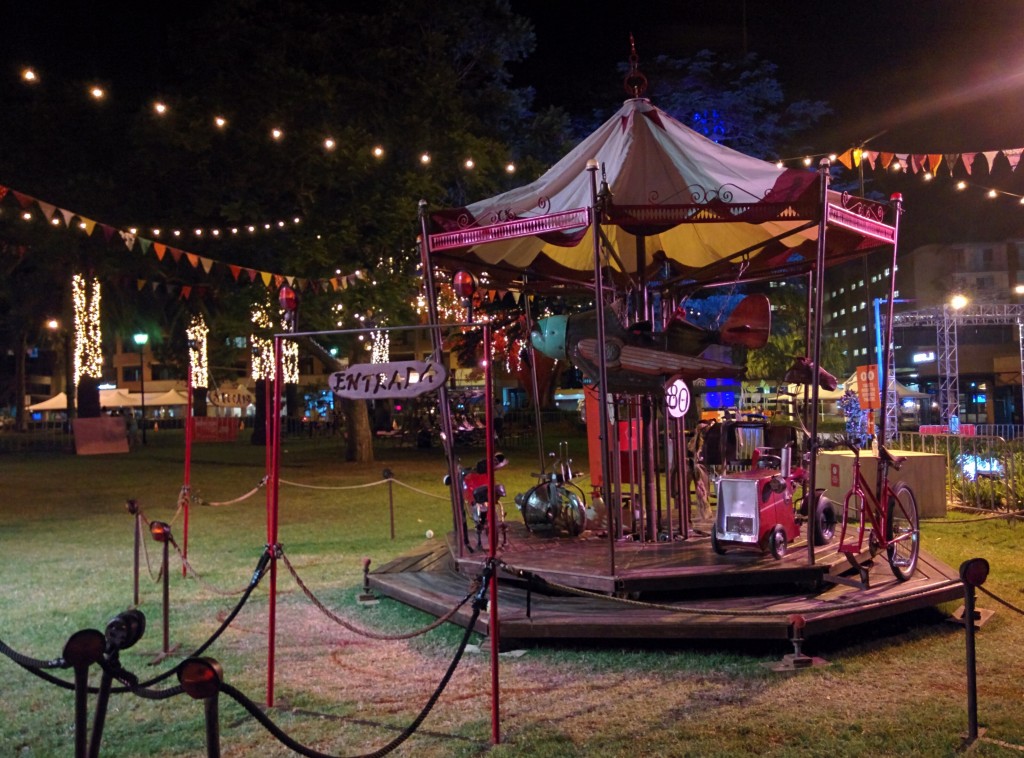 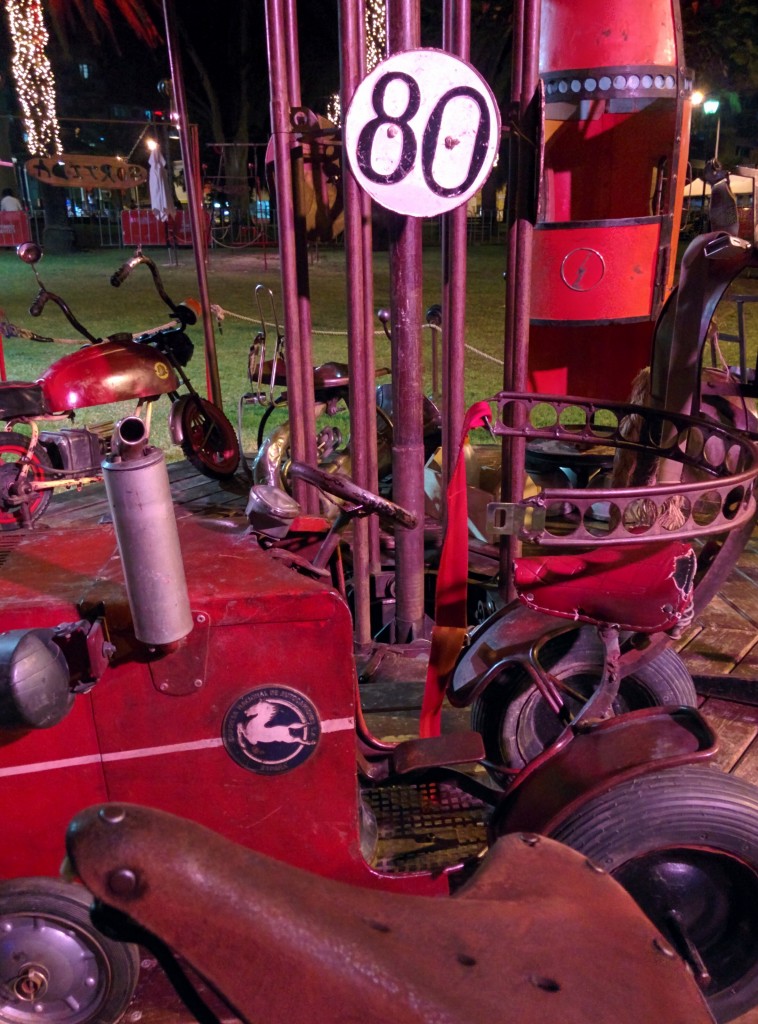 Les Tumbones – A most excellent ride for adults, this primarily involves lying in a hammock and listening to relaxing music and instructions. Meanwhile, your child pulls on a string to fan you. 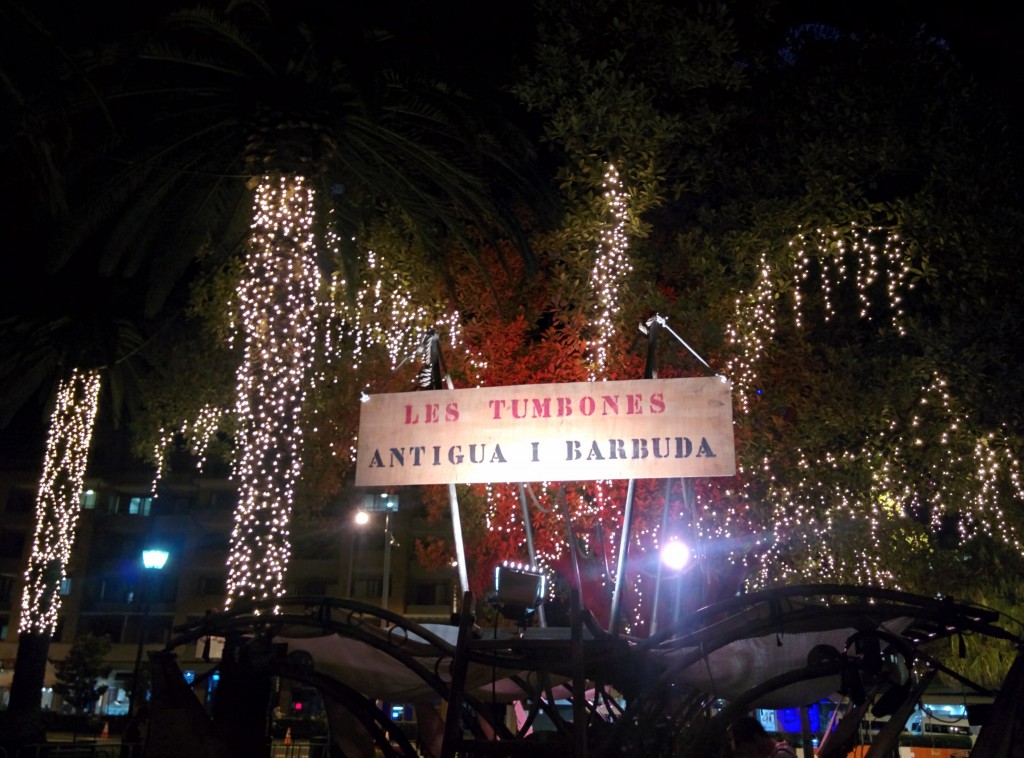 Les Trineus – The swinging sleighs are for smaller children or the less adventurous of all sizes. These sleighs swing through the air as you contemplate the world.

Tingalya – A hand cranked Ferris Wheel made from toilet seats and truck wheels. We have mini umbrellas on hand in case of weather or for when the fruit bats get diarrhea (too many figs). 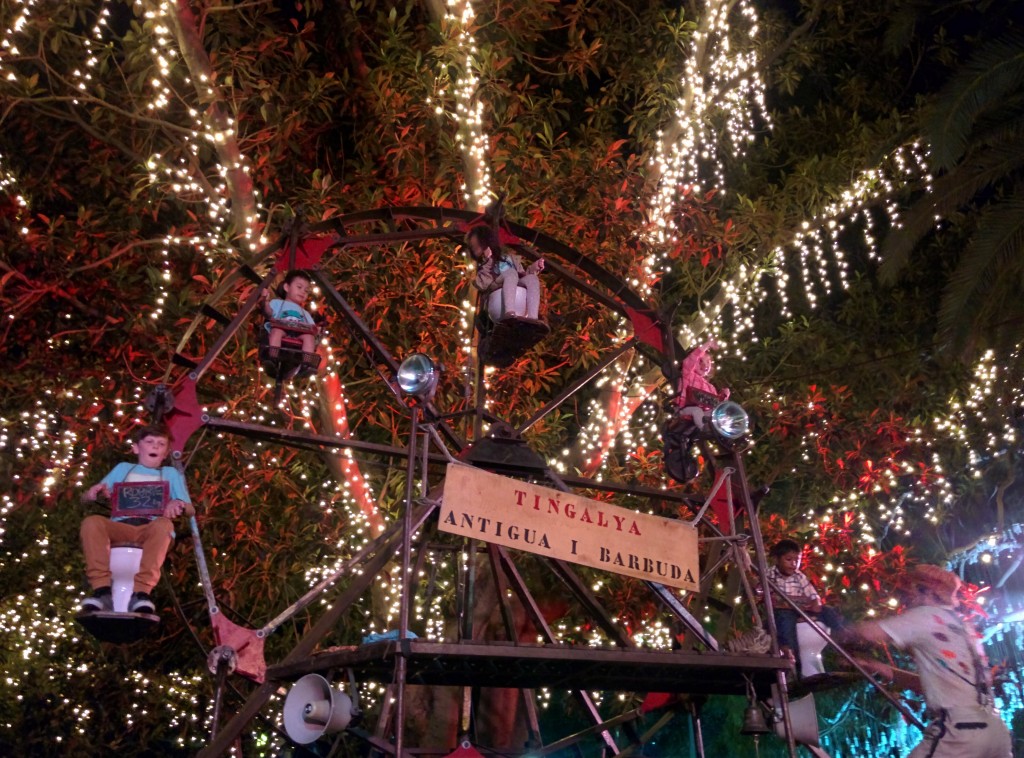 Recently havoc has erupted due to a series of incredibly hot days, punctuated by electric storms. This has resulted in some measured insanity, with eye spy being played over the loud speaker, ongoing water balloon battles, and spray bottle antics. Also, some educational elements, for example teaching certain internationals that some words they are using in common parlance with children actually fall into the ‘swear words’ category.

And you can find loads more great images on Broadsheet!

And illustrations by the amazing artist Sadami Konchi!

For my own amusement, I’ve also created a series of fictional names and biographies for my colleagues. I hope you enjoy. Come and join us for our last weekend! 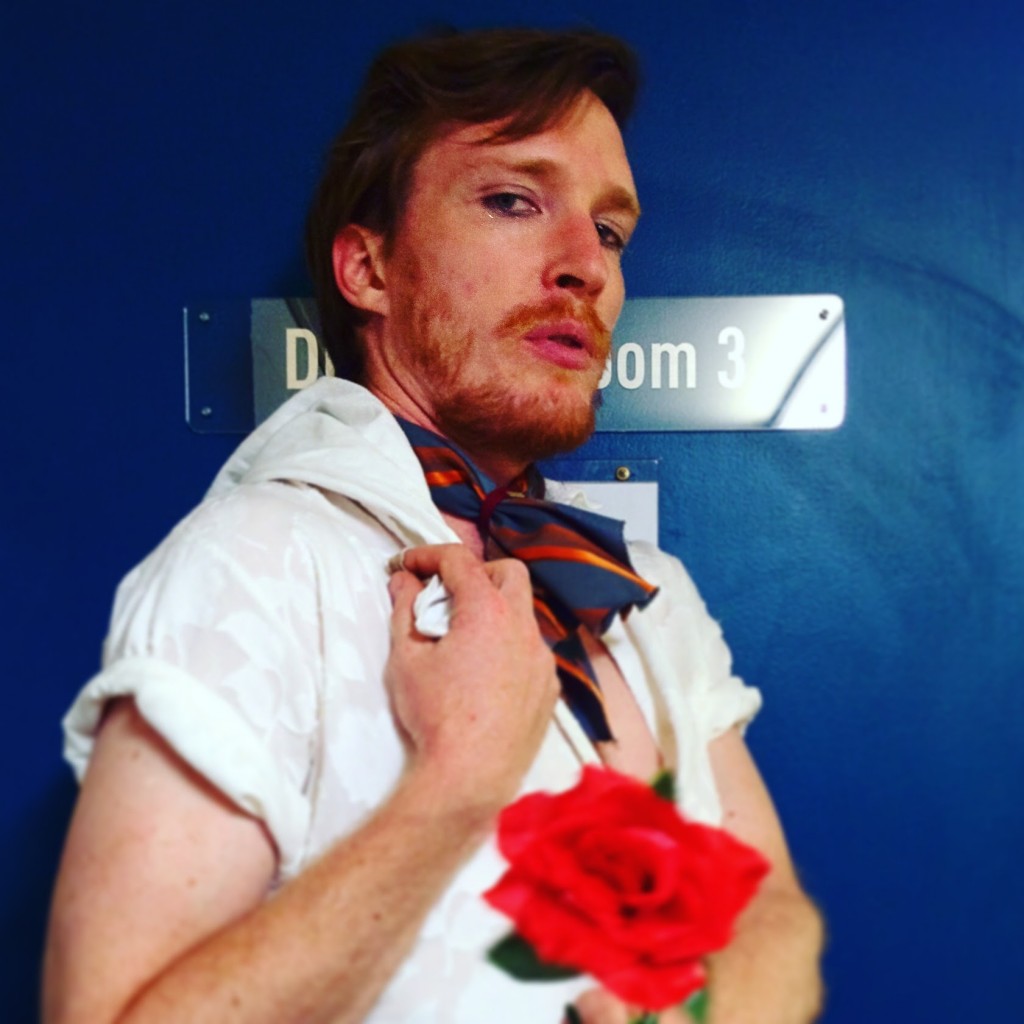 The Salmon. No one knows where The Salmon came from or his real name, but he’s recognisable for his distinctive hopping gait and incessant spawning behaviour. 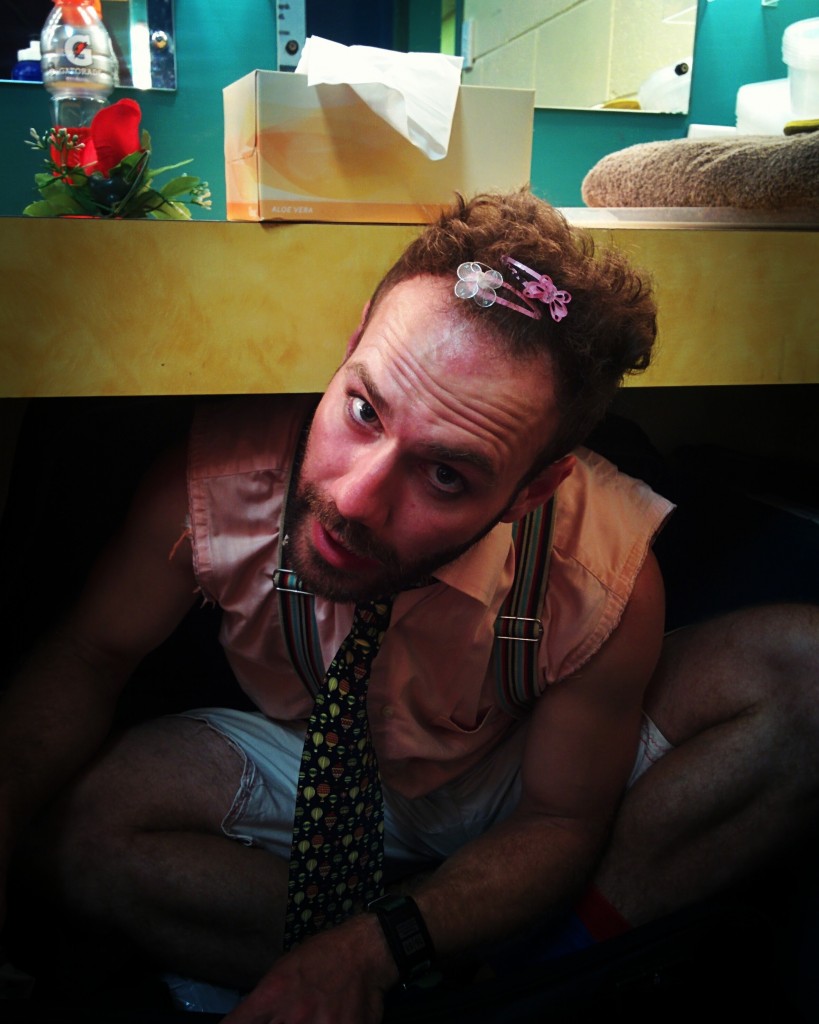 Meadowlark. Former contortionist. He isn’t even part of the carnival, but no matter which river they float him down, or what tree they tie him to, he still has a habit of turning up at the next venue. 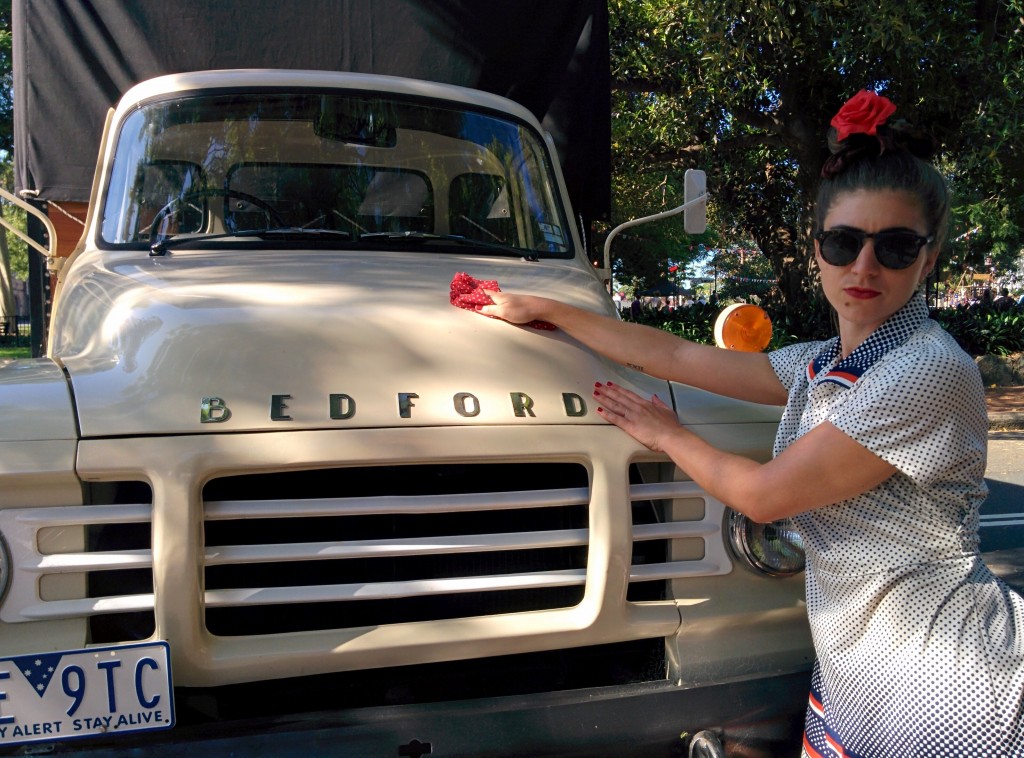 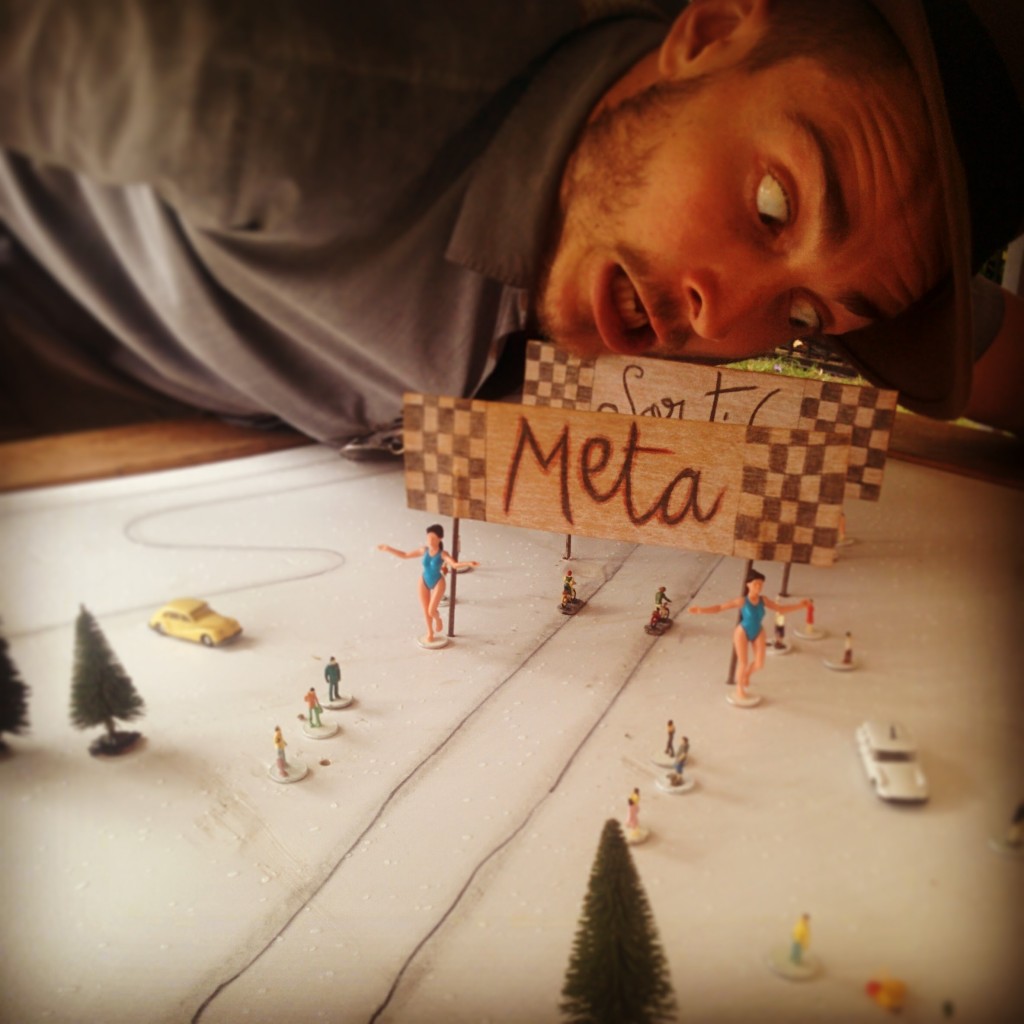 Shorty was expelled from his native Lilliput for exceeding maximum height restrictions in virtually every public institution and shopping centre by just age nine. Orphaned, he sailed the high seas as a deckhand for several years, until he was finally taken in by a traveling Catalan carnival, where his feet always reached the pedals 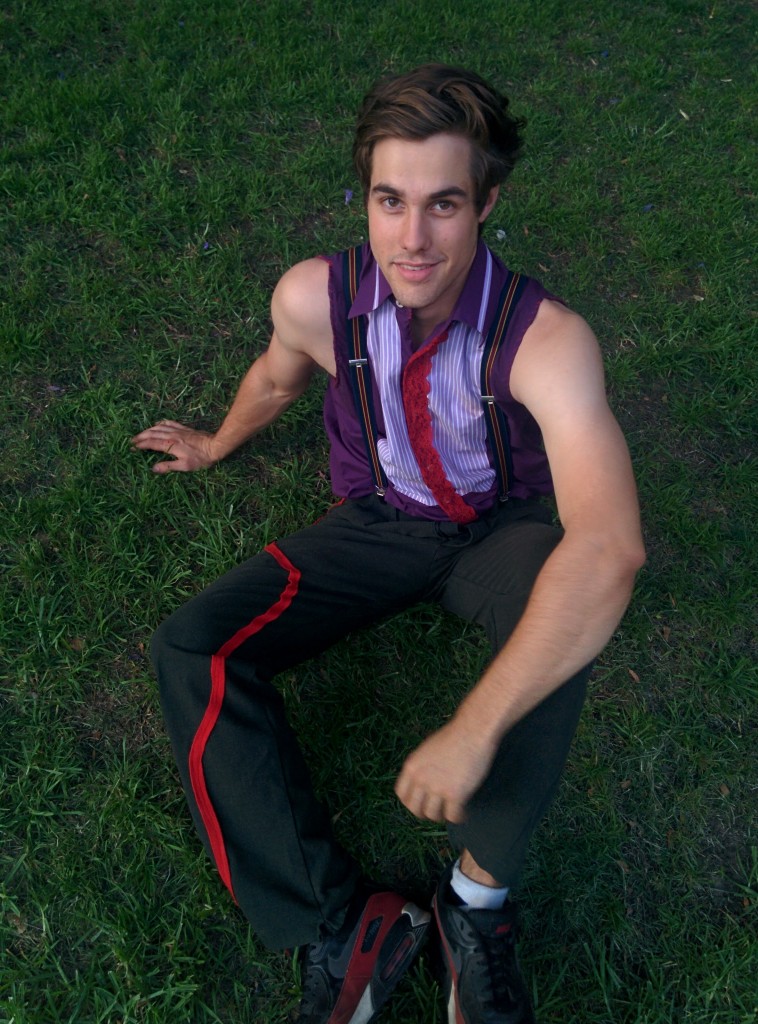 Puppy, born to a freak named Bum-Faced Betty, against all odds grew up to become the carnival’s most beautiful and prized snollyguster. Known for his stunning smile and ability to score a couple of extra bucks from flush-faced mothers

Julia ‘Butterfingers’ Beaucanon – popcorn vendor and mystic. She’ll read your palms but take her advice as you take her snacks – with a grain of salt. 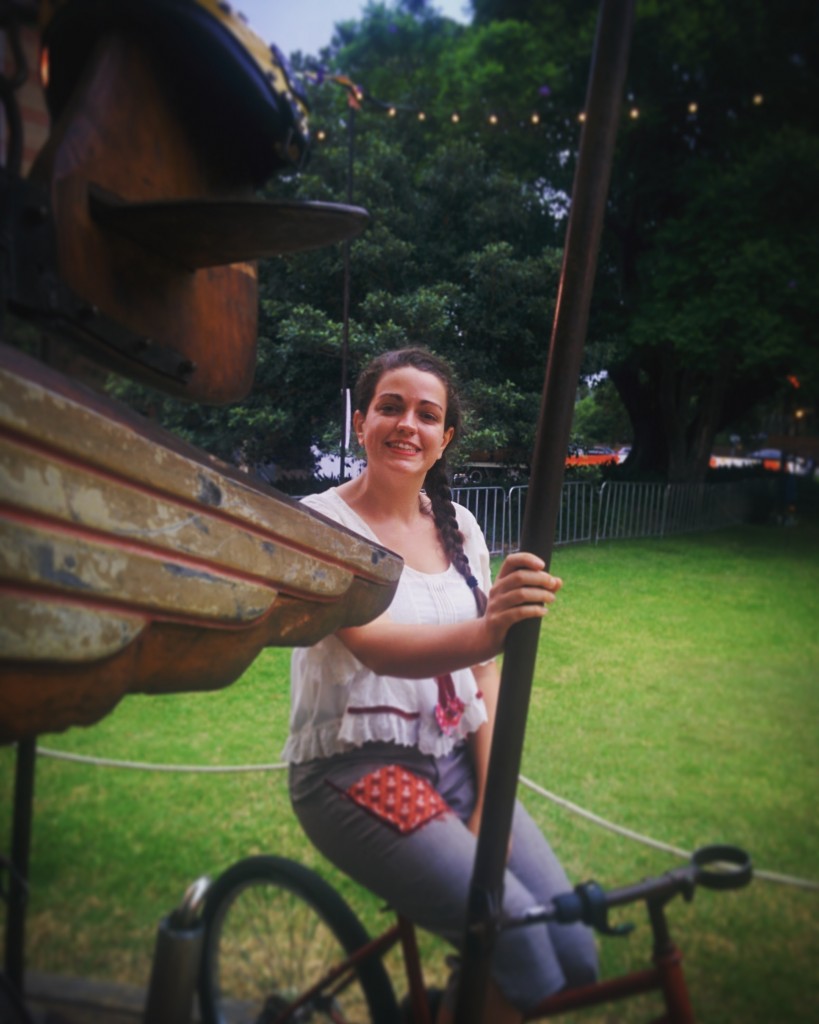 Bug “The Swear Jar” Van Buren. Bug is the sweetest little woman you’ve ever laid eyes on. She’s so sweet and cheery most folks would never think to use curse words in her presence. But those that slip up pay the bl**min price…

Introducing Roger “Liability Waiver” Kemp, in charge of ride maintenance and Ellie “Spitzie” Littleton. The manager of the carnival, she’ll make you a deal you can’t refuse. Just make sure you wash your hand after you shake on it. 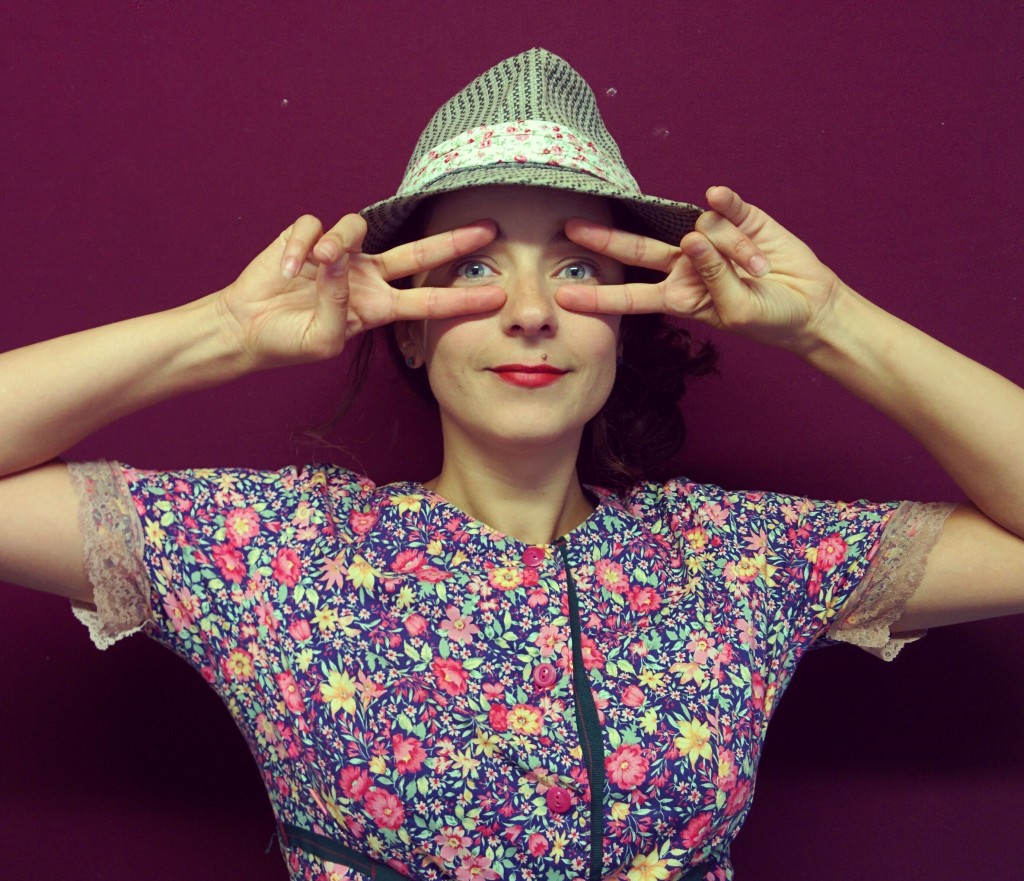 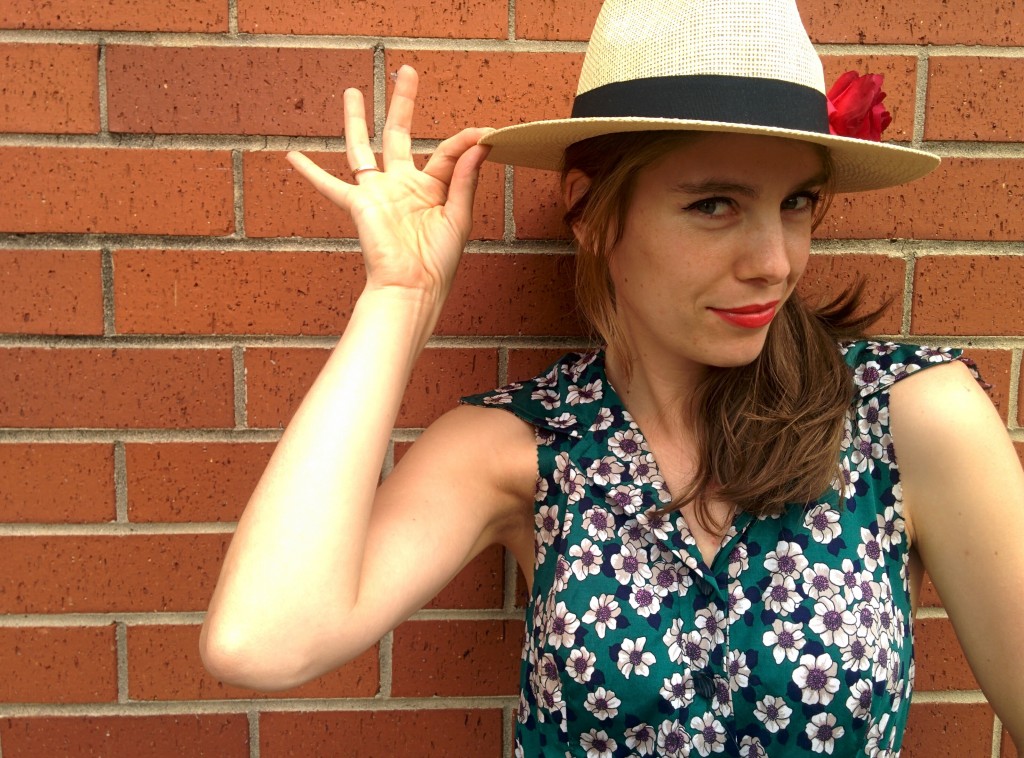 Scarlett McGee, disgraced former magician. Pulled a hat out of a rabbit. 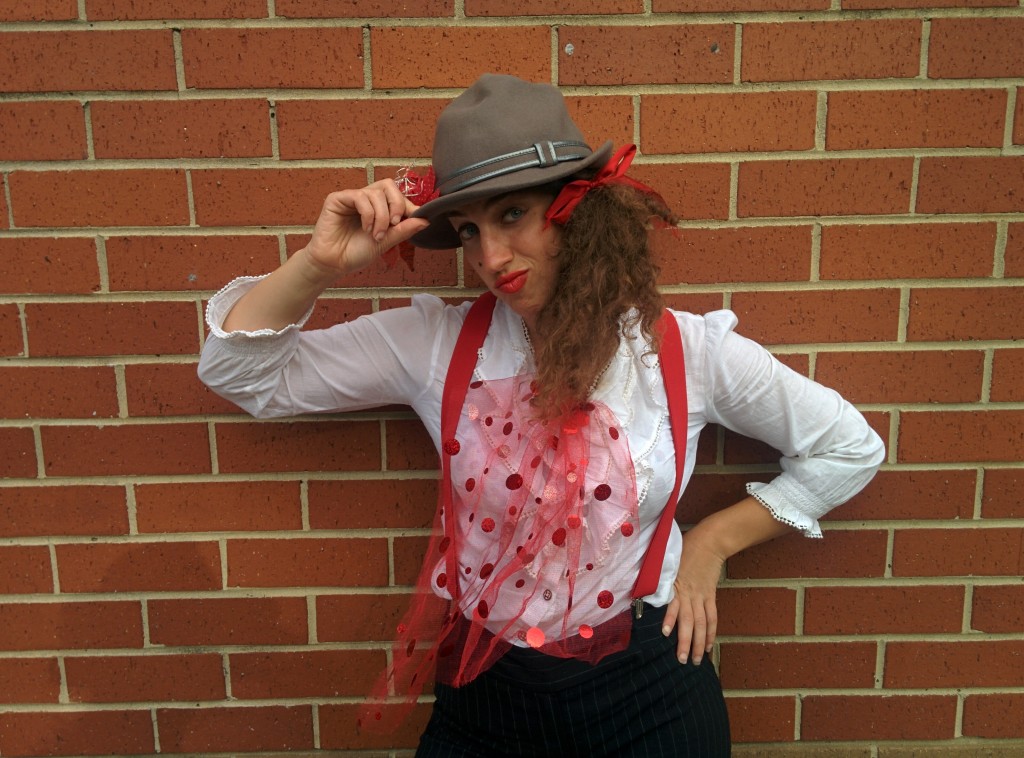 So I ran away and joined the carnival. They call me Duckie here. Now I earn a dime by operating the ferris wheel, but I got my name working in the sideshow, where my act was eventually axed for being “too fowl”