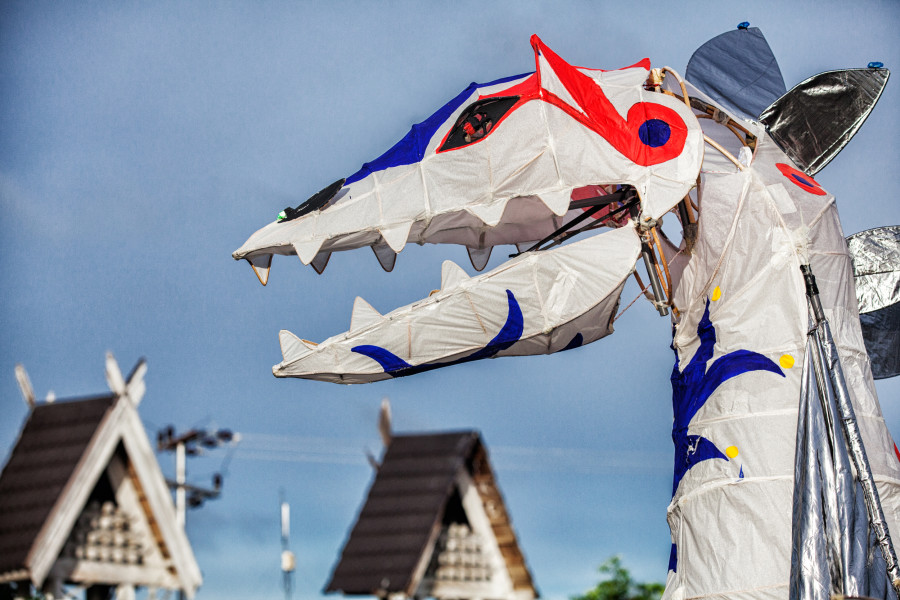 I have emerged from the jungle! For the past seven weeks I have been camped out in the wilds of Central Kalimantan (Indonesian Borneo) doing a very special project. Penjelajahan Orangutan is a collaborative street theatre project with an environmental message.

Hosted by Yayasan Permakultur Kalimantan, we worked closely with the permaculture centre and were based at their brand new studio in Suka Mulya, about 45 minutes drive outside of Palangka Raya. An idyllic setting, the high roofed studio had open sides, so we worked amongst the coconut and banana trees, with chickens, cats and scorpions for company.

The project had a collaborative focus at its core and was one of the main reasons for the seven week duration. We spent plenty of time working with our Indonesian hosts embarking on journeys of government protocol, consulting with Kaharingan elders and visiting village Damang.

One of the most important parts of the project was the extensive engagement with children. We provided workshops in performance and puppet making to over 300 children at seven schools and organisations (including an orphanage). The kids were amazing to work with and we introduced them to permaculture concepts and the centre space, as well as getting their input into the development of the show itself. Once launched, the children were invited to perform in the show the night it was staged in their village. The uptake was fantastic, with anywhere between 25 and 90 kids joining in the show in each village. They had significant roles, making up the bulk of the jungle and river scenes operating puppet lanterns in the shape of ikan (fish), kura kura (turtles), burung (birds), oolar (snakes) & palms. They also played a noisy motorcycle gang, and made sound effects for the great spirit Penjaga Alam.

Over the three weeks that the workshops took place, there was also an incredible amount of work completed to create the puppets. The children made the creatures above based on the workshops and designs that Matina created, leaving us with 70 puppets. Meanwhile, Matina and local architect Dedy constructed the five metre high spirit Penjaga Alam, complete with moving head, jaw and articulated wings. There was also the three metre high Batang Haring (Tree of Life), a significant and ubiquitous symbol in Dayak mythology. A universal child was also made and all three giant puppets were illuminated from within, and highlighted with coloured LEDs, making them spectacular at night. Finally an orangutan costume was also made from calico and natural fabrics such as local clay and coconut husks.

In addition we were very privileged to work with an amazing team of local artists, who each brought a unique skill and energy to the show. The physical development time was tight, and it is a testimony to the skills of the team that we created such a beautiful 30 minute show in just that short timeframe. The traditional Dayak dancers and musicians worked in very well together but were challenged to work in a new environment and style. Palangka Raya based parkour collective Hornbill in Flight took quickly to the new style of puppetry and brought life and energy to the puppets. There were also members of a theatre and performance troupe who fitted in seamlessly and contributed heavily to the overall oversight and direction.

In the end, we performed to over 500 people, across five performances, with over three hundred children participating. It has been an incredible experience which completely exceeded my expectations. What I could not have foreseen, and was totally humbled by, was the traditional welcoming ceremonies, camping trip, visits from the Deputy Mayor, Minister for Tourism and Australian embassy representative, private ride into the orangutan sanctuary, farewell choir at the orphanage, wedding invitation and opportunity to decorate and cruise on a vessel during the Isen Mulang Festival. Just remarkable.

There are a great deal more images, videos and information over on the project blog, so feel free to have a browse if you’d like to know more!