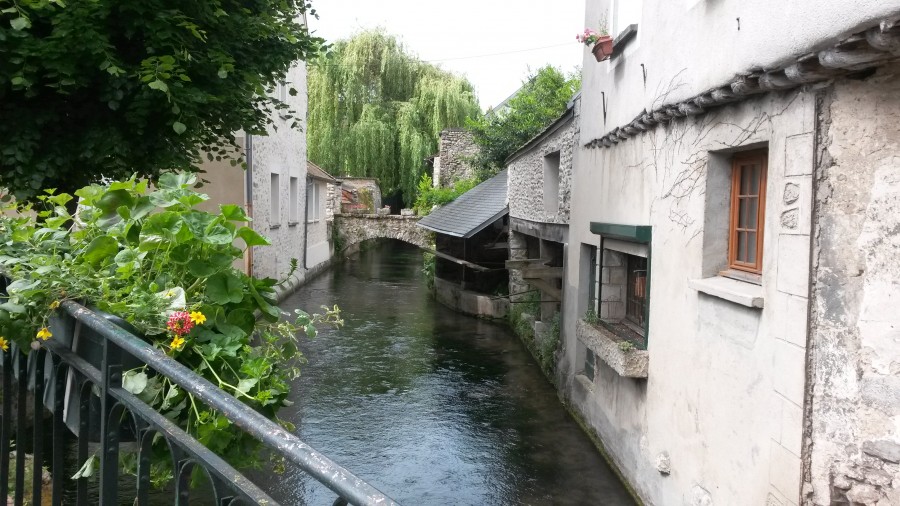 Ecole Gaulier is an institution in so many senses of the word.

I spent a Parisian spring attending the ‘characters’ module and exploring this style of schooling. I would like to share my impressions with you, with the caveat that my time at the school was brief, and my experience quite personal. I could wax lyrical about the unconventional teaching methods, student camaraderie, and recount my favourite Philippe Gaulier insults. But there are plenty of other blogs and websites that will already do that for you. 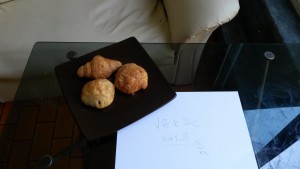 The upside of staying in a sharehouse with an Irishman, Norweigan & no fridge – you have to eat fresh croissants for breakfast every day

First up, I was impressed – Philippe’s insights into theatre making are genuinely insightful and valuable. Though my time at the school was short, I am frequently referring back to my notes and recalling advice that is super applicable to almost anything I do in the theatre world. They’re also useful tools for critiquing other people’s work, and understanding why you may have liked something, or why it didn’t work.

Philippe has a keenly practiced director’s eye for staging, timing, relationships, charisma & composition. He’s also surprisingly generous with his feedback and demonstrations in how to strengthen scenes or fix problems. His harsh wisdom almost always cuts through to the essence of theatrical excellence. “If a new character enters the stage and he does not bring anything new to the scene, why does he bother to enter?” Laying out the Confucius style truths to ponder for years. 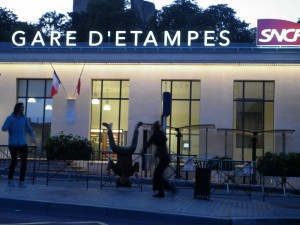 Student shenanigans at the train station

He also makes reference to other theatrical elements, after all, performance is just one art form of many that work together to create a great show. Watching him give costume and scripting notes on the second year bouffon pieces was also quite valuable. “Sometimes the actor can enter the stage when the audience are applauding the set, and pretend that the applause is for him,” he cautions.

The insults are also totally hilarious – entertaining but also a great example of how to build humour, both by treading the line of the politically incorrect, fostering ‘in-jokes’, timing and using unexpected details to maximise the fun. I got to watch the Philipe Gaulier show live every day! Even the school’s website is quite hilarious, in his characteristic absurd, confusing manner.

The daily movement classes were also a real pleasure, with a mix of stretching, play and serious (though generally completely baffling) spatial exercises. The exercises all come with a Lecoq style philosophy and were for me a welcome daily routine that felt great for my mind and body. The element of play was particularly invigorating, with games in memory, physical dexterity as well as hearing and focus. The games themselves were super creative and engaging, from simple things like jumping rope, team sports like dodge ball, and children’s games adultified, for example a derivation of ‘Stuck in the Mud’ reimagined as ‘I am the sex maniac..argghhh!’ 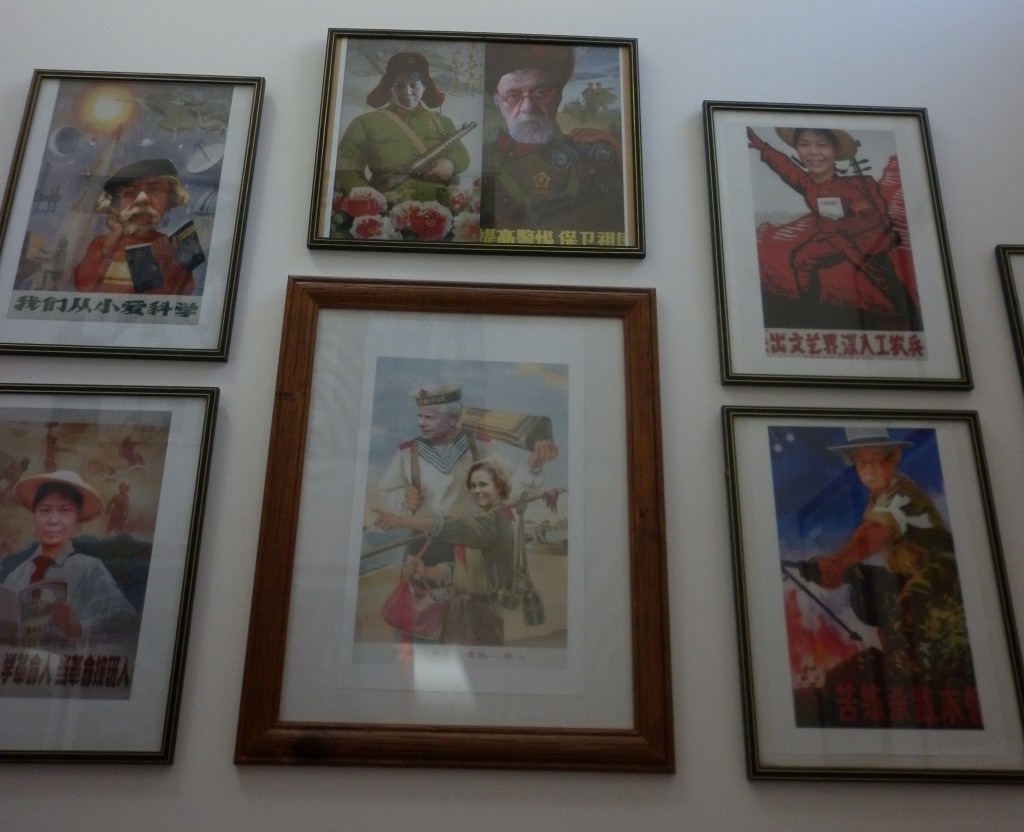 Beautiful artworks in the school foyer

However, the experience was not without its negatives.

Although glorified by most students with a cultish devotion, the negative reinforcement teaching technique is not something which I believe is good for everyone. I really think that the ‘no pain, no gain’ ethos employed by gyms and theatre schools around the world is pretty twisted. But hey, some people love it. So if you think you can handle being told “you’re shit”, or “fucking, fucking boring” every day (except Thursdays, when “the old car from Chzech Republic needs to visit the mechanic”) then go for it! Hats off to those who endure this privilege for the full two year degree.

A word of advice – a lot of the activities are improvisation oriented, so I would recommend brushing up on these skills in advance. Because of the format of the class whereby the ‘shitest’ students will be sent off stage after 30 seconds of improvising, those who need the most practice get the least time to work on their craft. Arguably you could do this outside of class time, but there’s a lot to be said for practicing in front of an audience too.

The school itself is also amok with personal dramas, and would make an excellent reality TV series. (With some kind of lame name like: CLOWN FIGHT) There are the egos, emotional breakdowns, personality clashes, romantic break ups. Most students live in the village of Etampes, where there is very little else to do or other English speakers to socialise with, so the school and its students become embroiled in an incestuous whirlpool. This is also idealised with cultish devotion. Etampes and the school was described to me as a valuable ‘monastic experience’. 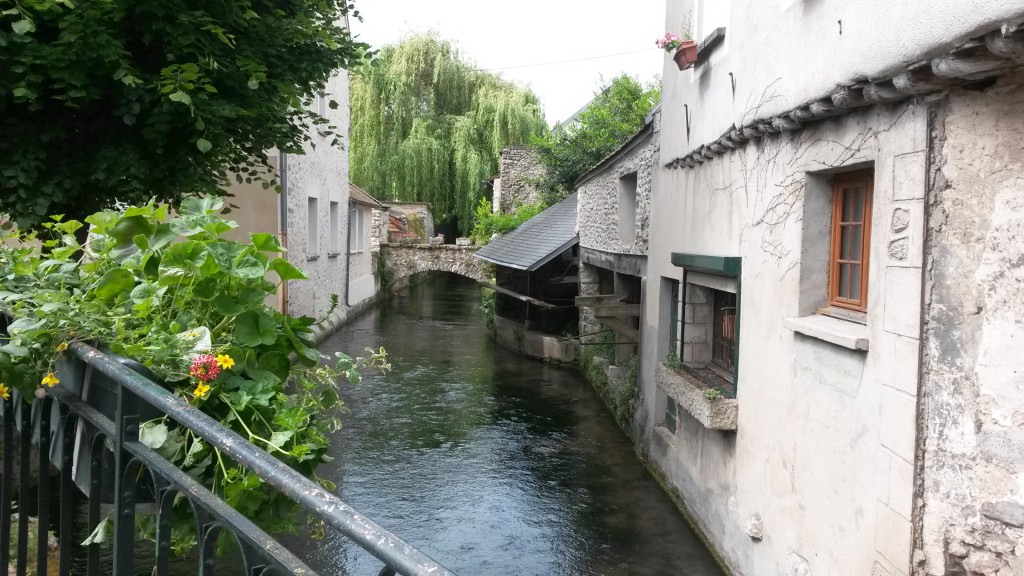 But at the end of the day, you really have to go on CLOWN FIGHT. Even if you don’t become the next  Sacha Baron Cohen (illustrious former student), you will become a member of an exclusive, if little known and even less respected, club. You will also have a unique, life enriching experience! And plenty of material with which to delight and bewilder your family and friends for many years to come. So buy your plane ticket to Paris, and spend a few weeks being yelled at, emotionally abused and occasionally hit (yes for real) by an old guru.

Well, I’ve gotten this far and now its too tempting to not share any insults with you, so I’ll include some of my faves via my instagram feed, enjoy.

“Eez this a beautiful moment, full of creativity and imagination? Or eez this a leetle dog shit, the shit is on the pavement in paris, and the dog is homosexual.” #shitmyteachersays #parislife #theatreofdreams #inspirational #art

“Wheneever an Australian ‘as an idea…It is an international catastroph” A photo posted by Duckie L’Orange (@duckielorange) on Jun 3, 2015 at 11:03am PDT

“Classic hetereosexual, does an experiment, gets a bit drunk and zen wake up ze next morning in ze car, next to thees monster? Or completely unfuckable?” #shitmyteachersays #parislife #theatreofdreams #inspirational #thuglyfe A photo posted by Duckie L’Orange (@duckielorange) on Jun 5, 2015 at 9:38am PDT